(Jacques Cornillon was instrumental in arranging the experiments that Townsend Brown conducted in France in 1956.)
Jacques M. Cornillon, of Point Pleasant, passed away Saturday, May 24 at the age of 98 at his home with his family by his side. 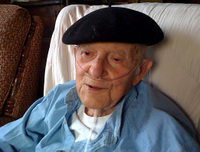 Born in France in 1910, he graduated first in his class from the Ecole Nationale Supérieure de l’Aéronautique in 1933. As a young French Air Force officer, he met and fell in love and in 1935 married Elizabeth, a quiet young American woman studying in France on a Fullbright Scholarship. Too soon, the young couple was swept up in World War II driving them to the south of France, where their first child, John, was born.  Jacques fell victim to tuberculosis and was sent to a sanatorium in the French Jura mountains where eventually he was one of the very few lucky ones to survive this dreaded disease.  As soon as the War released its grip on France the young family made their way to America.

First settling in New England, where two more children, Peter and
Margaret, were born, the couple visited relatives in New Hope, fell in
love with Bucks County and moved to Point Pleasant in 1948.  The family
finally settled in their current home which Jacques bought at auction
for $14,000 on a rainy Saturday afternoon, helping friend Frank Kolbe
bid up the price, ending up as the high bidder.

For the next quarter century Jacques, with Elizabeth as his
secretary and assistant, worked out of this country home serving as the
U.S Technical Representative for France’s largest aircraft company.
During that time he traveled throughout the two countries studying the
latest developments in aeronautical and aerospace engineering for his
company. In the 1960’s, in recognition of his contributions to the post
war development of France’s aerospace industry, he was awarded France’s
highest civilian honor, the Légion d’Honneur.

A man of deep intellectual and philosophic curiosity, he pursued
interests in many different areas.  He was one of the founding members
of the Unitarian Fellowship in Fountainville. A love of the arts led
them to meet and become good friends with several of the painters of
their time, Charles Ward and Lou Stone, and years later with Glenn
Harrington and Ray Mathis.

In retirement he and Elizabeth opened a French antique shop, Time
& Tide, in Point Pleasant, stocking it with the finds they made in
antique shops throughout France on annual stays at his French family
home. He specialized in antique French clocks which he, and later his
son-in law, Chris Mattheson, renovated and repaired. At age 65, a
fascination with forged iron led him to study one summer with a
blacksmith in France.  He converted a small shed next to the antique
shop into a working forge. In his 70’s he became enamored with France’s
historic parquet floors and began importing parquet flooring, many of
which he designed and custom made into unique borders and central
designs.  He and Elizabeth became members of the Doylestown Alliance
Française reaching a new circle of friends. 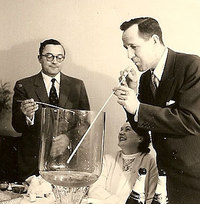 As his physical health began to fail, he channeled his remarkable
energies and curiosity into mental pursuits, continuing his studies on
the nature of gravity. This followed on work begun in the 1950’s when
he was involved with his company and an American scientist in a series
of significant scientific studies on anti-gravity.

He will be deeply missed by his family and friends.

(Photo on right shows M. Cornillon and Townsend Brown celebrating the success of their experiments in France in 1956)