Personally, I love it when critics say some novel Idea won’t work. I say, just build the thing, and we’ll see: 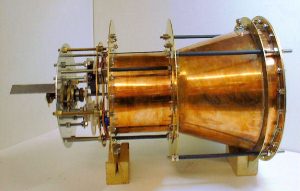 Chinese researchers claim they’ve confirmed the theory behind an “impossible” space drive, and are proceeding to build a demonstration version. If they’re right, this might transform the economics of satellites, open up new possibilities for space exploration –- and give the Chinese a decisive military advantage in space.

To say that the “Emdrive” (short for “electromagnetic drive”) concept is controversial would be an understatement. According to Roger Shawyer, the British scientist who developed the concept, the drive converts electrical energy into thrust via microwaves, without violating any laws of physics. Many researchers believe otherwise. An article about the Emdrive in New Scientist magazine drew a massive volley of criticism. Scientists not only argued that Shawyer’s work was blatantly impossible, and that his reasoning was flawed. They also said the article should never have been published.