… as produced by rocks and coconuts, at a gathering last month of artists the “Mind Meld Audiovisual Retreat” New England: 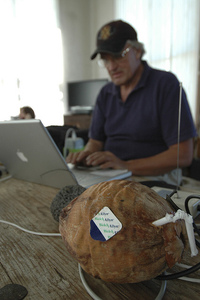 And then there were the rocks and coconuts. Duncan Laurie and electrical engineer Gordon Salisbury have been sonifying natural signal sources, hooking up vintage radionics equipment and connecting rocks and bananas and such to signals. Richard and Josh brought along part of their formidable collection of modular equipment, and a great crackling, screaming analog racket resulted.

…Based on precedents set by Cleve Backster and T. Townsend Brown, plants and rocks are fitted with electrodes or have copper leads affixed to them. Small voltages present are picked up with a variety of test equipment, including Wheatstone bridges, rate of change convertors, EKGs, and the IBVA brainwave monitor. The resulting data streams are converted to MIDI and used to drive Ableton Live.

Much of our discussion in the forums of late has revolved around the vagaries of “proof.” Perhaps we’re looking in all the wrong places…